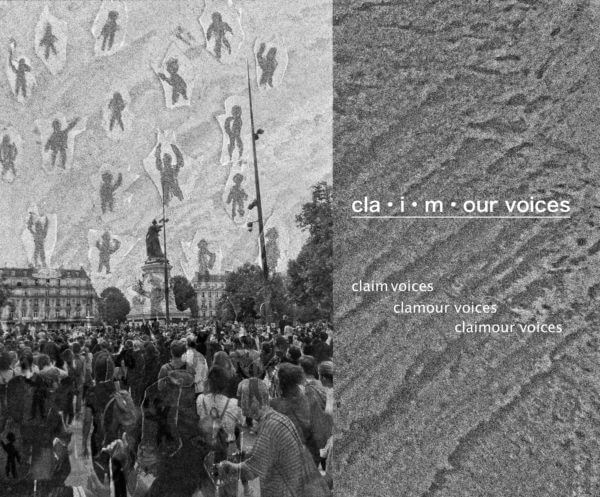 "Exploration and re-amp process of the expressiveness of a protest"

Cla·i·m·our voices is an artwork which intends to revitalise the protest of the 13th of June 2020 by recreating the fluidity and the energy of a crowd and its clamour. The listening to this work creates a different perspective of the event which is not led by the visual and the information processing by the mass media. Instead of observing the Génération Identitaire’s banner, the police’s barricades, the intense-media coverage of the violence or the simple assessment of the number of protestors, the sound piece unfolds the density of the crowd and the sonic bond between people through slogan song, shouts and applauses in unison.

On the 13th of June 2020, I went to the protest Justice for Adama in Paris, Place de la République. Adama Traoré was a 24-yo Malian-French man who died in custody after being restrained by police in 2016. His sister, Assa Traoré became an important anti-racism activist and created Justice for Adama, which is resonating with the killing of George Floyd and Black Lives Matter movement. This protest was declared illegal by the Prefecture of Paris and the police blocked the streets around the Place de la République. Only one street gave the possibility to enter or to leave the site. The protest had to adapt itself to its forced stillness. Even if we were not able to freely walk in Paris, we can still occupy the space, with our physical presence and with the sound of our slogan songs, shouts and applauses. At the same time, on the roof of a building in the front of the place, a group of people from Génération Identitaire, a neo-fascist and white supremacist movement proudly displayed a huge banner with the message: "Justice pour les victimes du racisme anti-blanc... White lives matter” (Justice for victims of anti-white racism... White lives matter).

“Tout le monde déteste les fachos!” (Everyone hates fascists!) were echoing in the square, chanted by the crowd in response to that provocation. Later, a group inhabitants of the block tore the bottom of the banner to pieces from their balcony and Acrobat 94, a parkour performer, made his way onto the roof the building to remove totally the rest of it under a row of applause and clamour. After of a brief moment of euphoria, detonations of tear-gas grenades started going off and the Place de la République began slowly to empty of its crowd until it was entirely deserted. In the midst of this whirlwind of events, I was recording this vast human soundscape, a lively arrangement of several thousands of voices, which surrounded me during two hours. It was an intense moment, both in terms of physical, visual and listening experience because of its explosive expressivity which was accumulated into this confined version of the Place de la République. For a long time, I found very difficult to do something truly useful with these recordings because I was afraid to no be able to rightfully relay all the richness of this moment. Moreover, the significant amount of audio material put a blockage that was keeping me from getting ahead in the development of my project.

Once I listened to my recordings at length several times, I started to be able to hear the essence of this protest, its beat and its natural progression between distant and close clamours as an ebb and flow of tides. I understood that to shorten the duration of my sound track, it was necessary to cut off of non-essential parts, while keeping the details which form the movement of the crowd. Even if the structure of cla·i·m·our voices is articulated by subtle cuts and transitions between each used segment of my recordings, the sound work still unfolds all the sonic events from the protest of the 13th of June 2020 in the same chronological order. Thereafter, I also experimented binaural treatments to increase the immersive listening to my work because I felt the importance to recreate this feeling of becoming one with the crowd. One last thing that did concern me was to add a sense of commitment during the listening to my work, so it is the reason why I chose to save a copy of cla·i·m·our voices in the online sound map, SonicMaps of the company Locative Audio. This sound mapping platform proposes the possibility to upload a sound file to geolocate it on a map. This means that the listeners have to be physically inside the geo-tracking area to trigger the content. Therefore, if someone stands around the Statue de la République, she can engage with the listening of the protest of the 13th of June 2020 which is echoing in this zone.